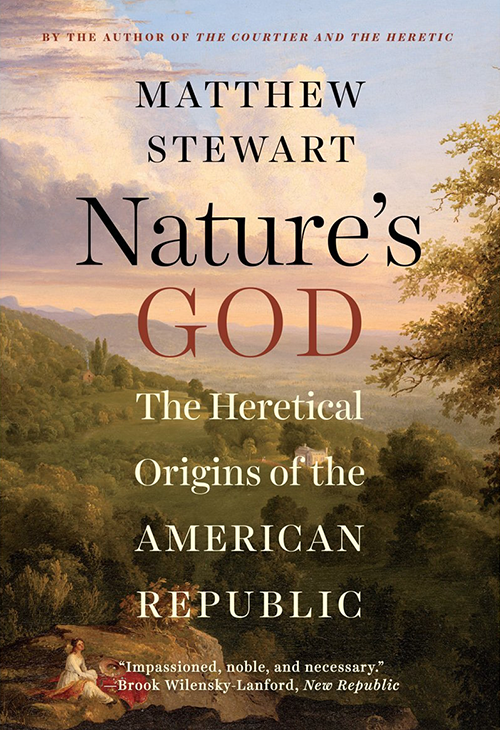 Not only the erudite Thomas Jefferson, the wily and elusive Ben Franklin, and the underappreciated Thomas Paine, but also Ethan Allen, the hero of the Green Mountain Boys, and Thomas Young, the forgotten Founder who kicked off the Boston Tea Party―these radicals who founded America set their sights on a revolution of the mind. Derided as “infidels” and “atheists” in their own time, they wanted to liberate us not just from one king but from the tyranny of supernatural religion.

The ideas that inspired them were neither British nor Christian but largely ancient, pagan, and continental: the fecund universe of the Roman poet and philosopher Lucretius, the potent (but nontranscendent) natural divinity of the Dutch heretic Benedict de Spinoza. Drawing deeply on the study of European philosophy, Matthew Stewart pursues a genealogy of the philosophical ideas from which America’s revolutionaries drew their inspiration, all scrupulously researched and documented and enlivened with storytelling of the highest order. Along the way, he uncovers the true meanings of “Nature’s God,” “self-evident,” and many other phrases crucial to our understanding of the American experiment but now widely misunderstood.

“Matthew Stewart’s brilliant new book breathes fresh life into our understanding of the American Revolution. Beautifully written and lucidly argued, Nature’s God recovers the lost voices and original intentions of the thoughtful men who made America. Sure to stir controversy on all fronts, Nature’s God will set the agenda for serious discussion of the American Revolution’s significance in world history.”

— Peter S. Onuf, author of The Mind of Thomas Jefferson

“Splendid . . . imaginative but never fanciful, even at its most surprising. What lends Nature’s God a good deal of its verve is Matthew Stewart’s unabashed attachment not only to the revolutionaries as they really were, but to the skeptical rationalism they embodied. This is partisan scholarship as it should be written, and much needed service to the public.”

— Alan Ryan, author of The Making of Modern Liberalism

“In a book that offers you a chance to rethink much of what you thought you knew about America’s founders, Matthew Stewart traces the little-known influence of secular philosophers, from Epicurus through Spinoza, on the revolutionary generation and offers a lively, powerful, and erudite refutation of the myth that the framers of our secular Constitution had any intention of founding an orthodox Christian nation.”

— Susan Jacoby, author of Freethinkers: A History of American Secularism