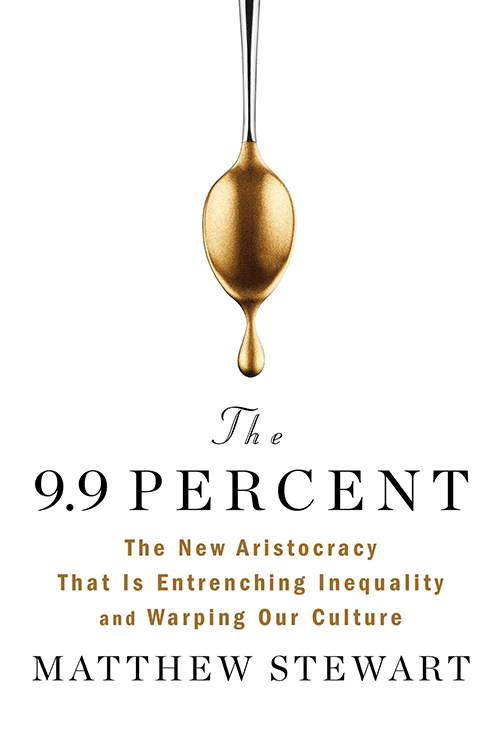 A scorching, trenchant analysis of how the wealthiest group in American society is making life miserable for everyone—including themselves.

In 21st century America, the top 0.1% of the wealth distribution have walked away with the big prizes even while the bottom 90% have lost ground. What’s left of the American Dream has taken refuge in the 9.9% that lies just below the tip of extreme wealth. Collectively, the members of this group control more than half of the wealth in the country—and they are doing whatever it takes to hang on to their piece of the action in an increasingly unjust system.

They log insane hours at the office and then turn their leisure time into an excuse for more career-building, even as they rely on an underpaid servant class to power their economic success and satisfy their personal needs. They have segregated themselves into zip codes designed to exclude as many people as possible. They have made fitness a national obsession even as swaths of the population lose healthcare and grow sicker. They have created an unprecedented demand for admission to elite schools and helped to fuel the dramatic cost of higher education. They channel their political energy into symbolic conflicts over identity in order to avoid acknowledging the economic roots of their privilege. And they have created an ethos of “merit” to justify their advantages. They are all around us. In fact, they are us—or what we are supposed to want to be.

In The 9.9 Percent, Matthew Stewart argues that a new aristocracy is emerging in American society and it is repeating the mistakes of history. It is entrenching inequality, warping our culture, eroding democracy, and transforming an abundant economy into a source of misery. He calls for a regrounding of American culture and politics on a foundation closer to the original promise of America.

Praise for The 9.9 Percent

“The 9.9 Percent is a bracing and necessary read. Matthew Stewart does not pull his punches, making clear that the inequality and social stagnation plaguing the United States cannot be blamed on the billionaires. The ideology of meritocracy has been perverted to support a growing aristocracy, even as many of us passionately profess our commitment to universal equal opportunity. Highly recommended.”
—Anne-Marie Slaughter, CEO, New America

“Matthew Stewart’s new book is a captivating account of how America got into our current plight of extreme inequality and why that should concern all us—especially those of us in the top 9.9 percent. It closes with some suggestions about what we might do about it, which alone should make the book must reading in the Biden White House.”
—Robert D. Putnam, author of Our Kids and Bowling Alone

“A rip-roaring argument against oblivious privilege. Stewart is an agile, witty writer with philosophical gifts. He can make you laugh while you make better sense of America.”
—Alissa Quart, Author of Squeezed: Why Our Families Can’t Afford America, Executive Director, Economic Hardship Reporting Project

“Like the ancient curse of Midas, today’s extreme inequality poisons even those it privileges, as Matthew Stewart reveals in this urgent and convincing book. It’s not just the plutocrats who are ruining lives; it’s all of us who enable the toxic myth that our society is a meritocracy and who engage in practices we fail to recognize as ruinous. To understand how your life got so harried and your country so cruel, read this book.”
—Nancy MacLean, author of Democracy in Chains: The Deep History of the Radical Right’s Stealth Plan for America

“A charged study of the second-tier wealthy in America, the principal engine of inequality. Yes, the richest of the rich own a disproportionate share of the world’s wealth, the top one-thousandth who ‘now own almost one quarter of everything of economic value in the country.’ This represents an index of inequality that, writes philosopher and historian Stewart, we haven’t seen since before the Great Depression. Overlooked, though, are the remaining 9.9 percent in that top-10 tier, those whose net worth, beginning in the low millions, collectively embraces ‘more than half of [the] personal wealth in the nation.’ These people, overwhelmingly White and well educated, are enthusiastic proponents of the myths of merit and the wisdom of the free market (‘the great opiate of the 9.9 percent’), which is not free and also generates inequality as a feature and not a bug. Indeed, the capture and hoarding of so many financial resources by this cohort yields inequality on every front: enclaved neighborhoods that constitute de facto segregated housing, elite schools that constitute de facto segregated education, and an academia that is all too willing to support these inequalities and the accompanying politics of unreason. ‘Intellectuals like Amy Chua and Jonathan Haidt occupy the most meritorious perches in the American hierarchy of learning,’ writes Stewart. ‘Why do they have so much trouble calling a con job a con job? If they are not standing up for reason, then who is?’ Those are questions demanding answers, and underlying them is that politics of unreason, which ‘always favors injustice over justice and…always targets those who are most vulnerable.’ Stewart’s charges are comprehensive, and sometimes he can be a little testy (‘Universal American stupidity was undoubtedly a comorbidity factor for Covid-19’), but he matches them with a reasonable demand for a commitment to economic justice that would elevate all Americans, not just the lucky few. A sharp-tongued, altogether readable, and welcome assault on unrestrained wealth.”
—Kirkus (Starred Review)

“‘The spectacular rise of the 0.1 percent has received plenty of ink over the past decade,’ the author writes, ‘but the expanding chasm between the [lower] 90 percent and the [upper] 9.9 percent in some ways matters more to the real story of inequality in American life.’ And in this withering assessment of the overweighted, nearly intractable socioeconomic power of that 9.9 percent—all conveyed with an acid humor that recalls the late social critics Henry Fairlie and Paul Fussell—Stewart lays out why. From longstanding racial injustice to the rise of unreason in our politics to the myth of meritocracy to the disparities in health between rich and poor, Stewart folds in the latest in economics and social-science research to show precisely the terrible consequences of that inequality on the country at large. ‘The problem is not that the paid-up members of the 9.9 percent are an exceptionally self-interested or immoral group,’ he concludes.‘The problem is their failure to grasp that it is very difficult to act justly in an unjust society.’ Holding out a sliver of hope for positive change, Stewart’s study has the power to transform minds not yet closed to the possibility.’”
—Booklist (Starred Review)

“Dense with empirical detail and insightful analysis … relentlessly sharp”
—Nick Romeo, “How the Self-Serving Attitudes of the 9.9 Percent Perpetuate Inequality,” The Washington Post